El Chip is a Mexican-Style Beaver. He is a mid-size animatronic and one of the animatronics of the posh pizzeria band.

His appearance looks like a Hispanic Mr. Chipper, a character from a video game Scott Cawthon made before the FNAF franchise. (Note: Chipper has made a FNAF cameo appearance before but by his counterpart, Chipper's Revenge. For more information, go to another wikia that has the Chipper's Revenge page. Long story short, he is a secret final boss in the game FNAF World.)

He is a darker version of Chipper, but with his toes, stomach, and face being lighter. He also has rosy cheeks. His outfit has a Mexican-styled sombrero and a mandolin in his hands. He also has 5 fingers instead of the cartoonish 4. in Ultimate Custom Night, his mandolin changes to a guitar. 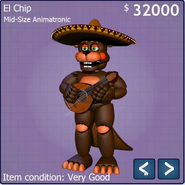 El Chip in the catalog.

El Chip's animation on the stage.

One of El Chip's ads promoting his restaurant.

Ditto, but guest-starring Freddy Fazbear as a pinata.
Add a photo to this gallery

El Chip as he appears from the Ultimate Group poster.
Add a photo to this gallery

Retrieved from "https://freddy-fazbears-pizzeria-simulator.fandom.com/wiki/El_Chip?oldid=27548"
Community content is available under CC-BY-SA unless otherwise noted.