Start a Wiki
Were you perhaps looking for its current form, Molten Freddy? Or his appearance from the game where is first introduced.

Ennard is the actual main antagonist of Five Nights at Freddy's: Sister Location, composed of the endoskeletons of the Sister Location animatronics. He is a returning character in the Ultimate Custom Night.

Ennard is a humanoid animatronic, his body disfigured with protruding wires. Unlike the other Funtime Animatronics, He possesses no suit, wears a mask, a striped yellow with green accents party hat, and a red button on his chest similar to Balloon Boy/Nightmare Fredbear, the wires surrounding him simulating the shape of a clown's bow. There are hanging wires that run along the body of Ennard and are shaped differently from the other animatronics, which possess wires coiled to look like muscle tissue, while Ennard's wires are a tangled mess.

Ennard also seems much larger and bulkier than conventional animatronics. He has blue eyes and very sharp teeth like Ballora. The right eye of Ennard has wires wrapped around him, making the eye useless. There is also a hanging eye off of Ennard's head.

Several eyes from his body are eyes of the other animatronics, which is confirmed that all the animatronics' endoskeletons formed to create Ennard. The eyes on Ennard's body are similar to the pixelated version of Ennard, in which the player himself (Eggs Benedict) pukes out Ennard.

By looking at Ennard's body, one can determine which animatronic's endoskeleton makes up each part of Ennard.

Ennard shows up in the vents and moves into your office. Ennard does not appear clearly on the monitor nor does he get affected by the vent snare. You must wait until you hear a squeaking noise and then close the vent door. 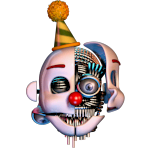 Ennard's mugshot from the Vent Monitor (Also his full mugshot).
Add a photo to this gallery

Retrieved from "https://freddy-fazbears-pizzeria-simulator.fandom.com/wiki/Ennard?oldid=27862"
Community content is available under CC-BY-SA unless otherwise noted.