Freddy Fazbear (simply known as Freddy) is the titular main antagonist of Five Nights at Freddy's, and a returning character in the Ultimate Custom Night, including some of his counterparts. He is the redesigned version of Withered Freddy.

Freddy Fazbear is the lead singer and leader of the original animatronics. Freddy's design is a brown bear with a lighter shade of brown on his stomach and muzzle, which has six black freckles. He has large, black eyebrows and wears a shiny, metallic bowtie of the same color and matching top hat. Similar to most of his bandmates, Freddy only has a set of squarish teeth on his lower jaw, but thick and rectangular, showing what appears to be wear on the end of each tooth.

This is for a character in the upcoming expansion to Five Nights at Freddy's 6.

The script is very short, but the character is VERY important nonetheless. This part is for the title character of Freddy Fazbear, the main antagonist of the series. He is a large entertainment robot, so be should sound robust and jolly, while also sounding, well, murderous. He speaks his lines after killing the player.

Using a mild voice filter to help the voice sound robotic is a plus.

Freddy himself starts off by approaching from the Left Hall. He notably attacks in 4 phases. The first phase consists of him standing far away from the Left Hall. The second and third phase shows Freddy getting closer to the player's Office. Eventually, when Freddy enters the fourth phase, the player has to immediately close the left door, otherwise, they'll get jumpscared by Freddy.

Freddy getting closer in the Left Hall (2nd Phase)

Freddy getting near the Office (3rd Phase)

Freddy next to the Office door (4th Phase)

Freddy's jumpscare.
Add a photo to this gallery

Image featuring Freddy performing in front of children in the Intro cutscene.

Freddy's cameo in FFPS in the Completion Ending.
Add a photo to this gallery 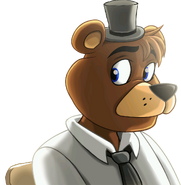 Freddy in the Chica Intermissions Cartoons.

The Freddy Fazbear trophy upon getting 8000 points (bronze-colored).

Freddy as he appears on the Ultimate Group poster.
Add a photo to this gallery

Freddy and Jack O' Chica in CAM 01.
Add a photo to this gallery

Retrieved from "https://freddy-fazbears-pizzeria-simulator.fandom.com/wiki/Freddy_Fazbear?oldid=26839"
Community content is available under CC-BY-SA unless otherwise noted.