Funtime Chica is a buyable entertainer from Rare Finds Auctions. She is one of the most expensive animatronics listed.

Funtime Chica has an appearance similar to Toy Chica.  She still has the orange calves and feet like Chica but she has an orange waist instead of pink, like Toy Chica's.  She has a built-in speaker just like Funtime Freddy & Funtime Foxy located on her midriff.  She also holds her signature cupcake but its appearance looks like a calmer, less frightening and repaired version of Nightmare Cupcake from the fourth game.  If one look closely, one of the plates on her pink upper body is missing. Just like the Funtime Animatronics, she has five fingers instead of the cartoonish four fingers that the regular animatronics have.

Funtime Chica: "She isn't here to ruin your day, she just wants her moment in the spotlight. She will occasionally appear on your screen as though posing for the red carpet, accompanied by camera flashes which may cause some disorientation. You'll need to learn to maneuver around your office despite these disorienting effects, otherwise someone else may take advantage of your confusion and crash the party." 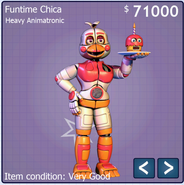 Funtime chica in the game

Funtime Chica's item icon.
Add a photo to this gallery

Funtime Chica as she appears on the Ultimate Group poster.
Add a photo to this gallery

Retrieved from "https://freddy-fazbears-pizzeria-simulator.fandom.com/wiki/Funtime_Chica?oldid=27521"
Community content is available under CC-BY-SA unless otherwise noted.