He is a returning character for the Ultimate Custom Night. Throughout Custom Night is referred as "The One William shouldn't have Killed".

Golden Freddy is just a golden recolor of Freddy from the first game without eyes leaving the endoskeleton eyes and always sitting slumped on the ground, never moving.

Rather than being a simple recolor of Withered Freddy, Golden Freddy now has a unique model of his own. He appears to be in a decrepit state, much like the other withered animatronics, with a missing left ear, and a good deal of damage with loose wires and exposed parts. Also similar to the other withered animatronics, he now has upper teeth, wires are coming out of his empty sockets and shoulders, and small bits of the suit are faded and ripped. His arms and legs seem darker than the rest of his body. His head is noticeably thinner than Freddy's. He seems to be more visibly clutching his microphone rather than having it lay on his palm.

Unlike his appearance in the first game, he seems much shorter, and unlike the other animatronics, he has human pupils instead of animatronic's pupils, and he appears to have no bow tie. If one looks closely, he has a black button on his chest, similar to Freddy. His head also seams to be tilting to the left rather than to the right. He seems to have some blood on his suit.

Golden Freddy's withered form will occasionally teleport in the Office in his usual slumped form. There are two ways to fend him off. The first involves flicking the monitor up like in the first game. The second involves putting on the Freddy Mask to make him disappear. If the player fails, Golden Freddy will attack the player causing the night to end.

He is also used to trigger Fredbear's jumpscare through a specific process. To do it, the player must have Golden Freddy's AI on 1, with everyone else at 0. The player must then search for 10 Faz-Coins around the camera system in order to buy a Death Coin from CAM 07. Once the player has obtained a Death Coin, they must have Golden Freddy teleport into the office, by repeatedly looking at and bringing down the monitor. This step proves quite repetitive as Golden Freddy is only set at level 1, meaning he rarely makes an appearance. Once the player triggers Golden Freddy, they must quickly click on the Death Coin icon at the top left of the screen. Doing so will activate Fredbear's jumpscare and give the player a game over.

If all other characters are set to 0 and Old Man Consequences' AI is set to 1, catching a fish will result in being sent to the "Fourth Layer Deep Area" from FNAF World. Speaking with OMC here will result in him telling Golden Freddy, "Come and sit with me a while," prompting the player to press enter. When this is done, OMC concludes, "Leave the demon to his demons. Rest your own soul. There is nothing else."

After unlocking every cutscene the player unlocks this cutscene of Golden Freddy from the first game sitting in a dark void twitching violently while getting dragged into the darkness away from the camera.

"Void" - The soundtrack that plays during the cutscene. 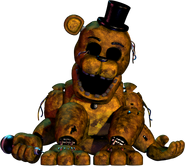 Render of Golden Freddy in the Office. 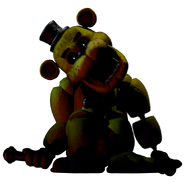 Golden Freddy twitching in the cutscene

Golden Freddy as he appears on the Ultimate Group poster.
Community content is available under CC-BY-SA unless otherwise noted.
Advertisement