Heather Masters is one of the voice actors for FNaF: Sister Location, FNaF World, and Five Nights at Freddy's: Freddy Fazbears Pizzeria Simulator, She is the voice actress for Scrap Baby.

Heather has a smooth and articulate voice, which can range from classy and knowledgeable to sassy.

With her dynamic vocal range, Heather has voiced numerous characters ranging from child and teen to middle-aged adult. Her ability to create unique character voices makes her well suited for cartoons, video games, and commercials.

She presents a skilled and seasoned professional repertoire with a BFA in Theatre, and 16 years experience both in acting and directing, making her a strong candidate for audiobooks. Have a corporate, explainer, or instructional project? Heather was a teacher for 8 years, giving her skills at communicating ideas passionately and clearly to audiences of all ages.

Heather has a 13-years old daughter who gets angry at her if she doesn't do Circus Baby's voice for her friends.

After laying aside her theatre degree for several years in exchange for starting a family, Heather was elated to discover voice acting as a way to set free once again all the voices in her head. Recently, she has ventured into video games, and can be heard as Spider-Gwen in Marvel's Avengers Academy, Circus Baby in FNAF World, FNaF: Sister Location and FNaF: Freddy Fazbear's Pizzeria Simulator, multiple characters in the game The Wardrobe, upcoming indie game Faceless, and a few games yet to be released. Additionally, Heather has voiced 25 audiobooks and has worked with clients like the American Heart Association, Whole Foods, and Lenovo.

Below is my info, but I'm not too particular. I put my appearance fee preference at $2000 because it's a bit more difficult for me to get away as I have young children, but I would never want to impede the group's opportunities. So, if the group agrees on a different fee, and the con would also like me to attend, I can certainly be flexible in that area.

This voice is for an overgrown doll. She's a killer but also misunderstood. She spends much of the game helping the player, and it's never truly clear if she is friend or foe.

Her voice should be a balance between cold and emotionless, while also sounding affectionate toward the player (as though caring for his well-being). The player needs to be afraid of this character, while also trusting her.

The voice should sound innocent, but with a hint of sorrow, even seduction.

This is the first of several jobs for this character. 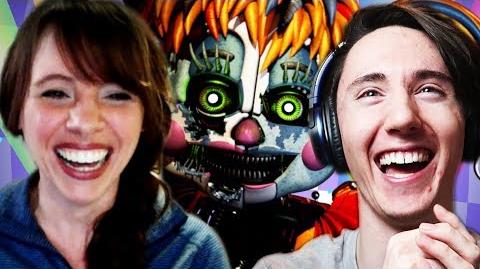 The FNaF Show - Episode 3 ft. Heather Masters (Baby)
Heather's interview on the FNAF Show.
Add a photo to this gallery

Retrieved from "https://freddy-fazbears-pizzeria-simulator.fandom.com/wiki/Heather_Masters?oldid=23920"
Community content is available under CC-BY-SA unless otherwise noted.