Lure Encapsulate Fuse Transport Extract (also known as Lefty) is a salvageable, and buyable animatronic in the game. He causes the most damage, and the player cannot get rid of him. It has also been confirmed this is now the body that The Marionette possesses. He is a member of Rockstars Assemble, a band including 'Rockstar' versions of Bonnie, Chica, Foxy, and Freddy.

Most of Lefty's head is similar to Toy Freddy's in construction, but his lower jaw is separated and connected with metal rods to the upper part. The majority of his body is a dark grey, with the stomach, muzzle, toes and the inside of his ears being lighter. He has the rosy-red cheeks like the Toys from FNaF 2, and his top hat and bow tie are red. Like the other Rockstar animatronics, he has a star on his chest. He holds a gold microphone in his left hand, and his left eye is small and black, while his right eye is normal with yellow pupils. His knee pads are also red. If one looks closely, they can see the Puppet inside of Lefty, which features on a secret death screen.

Sometime between the events of Five Nights at Freddy's 3 and Freddy Fazbear's Pizzeria Simulator, The Marionette was captured by Lefty as a part of Cassette Man's plan to get rid of the remaining possessed animatronics and eventually wound up at the alley behind The Pizzeria trying to get inside.

It is also confirmed in the Completion ending that the Puppet, now possessed by Henry's daughter, was giving life to the other murdered children from The Missing Children Incident and restoring their lives by making them animatronics as well.

In the Insanity ending, blueprints for Lefty revealed that he was made to trap The Puppet. This is supported by Lefty's full name (Lure, Encapsulate, Fuse, Transport, and Extract) and certain specs, particularly the False Sensory Output for a security bracelet and the Dream Wand to play the lullaby. The blueprints are credited to Fazbear Entertainment, Inc. Along with Scrap Baby, Molten Freddy, and Michael Afton, Lefty was burned in the fire and set free.

Lefty will hide in the left hall closet deactivated. If there is too much noise and heat, Lefty will become more agitated and active until eventually leaving the closet to hunt the player down. He can't be stopped by the door and lowering the heat and noise can't stop him, but he can be soothed by the Global Music Box (at the cost of a little chunk of power being drained). If the player fails to soothe him in time, Lefty will jumpscare the player. The player can also cam-stall him in the left hall closet, so he won't attack.

Lefty's icon on the animatronic selection.

Lefty preparing to attack in the Salvage Room.

Lefty slightly tilting his head towards the player in the Salvage Room.

Lefty, in the Salvage Room.

Lefty's Jumpscare in the Salvage Room.

Lefty's previous Jumpscare in the Office.

Lefty's rebranded jumpscare from the office.

A drawing of Lefty 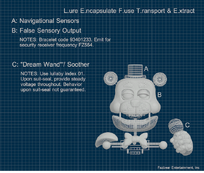 Lefty's blueprint from the Insanity Ending.

Lefty in the Alley, with lightning.

Lefty in the Alley, without lightning. 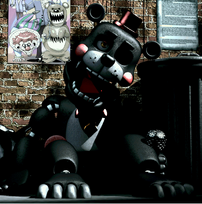 Lefty in the Alley, saturated and cut. 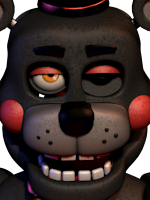 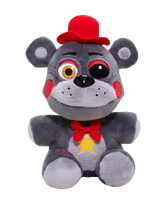 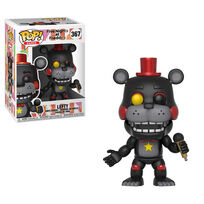 Lefty as he appears from the Ultimate Group poster.

Community content is available under CC-BY-SA unless otherwise noted.
Advertisement