Mangle is an antagonist in Five Nights at Freddy's 2 and a returning character for the Ultimate Custom Night. It is the redesigned version of Withered Foxy.

Mangle is a white fox, with red cheeks and lipstick. Mangle has one yellow/light orange eye, with one hollow/black eye. It has a pink snout with a black nose and pink outline around his eyes. Mangle has two sets of sharp triangular teeth, both top, and bottom, her body is a mess of wires and endoskeleton (seen coming out of Mangles ears) and out of the out of the other endoskeletons head. It has on hand stuck to the main endoskeleton body while the other is stuck at the bottom like the two feet.

Mangle comes through the vents, but unlike the others, Mangle will stay at your vent door for the rest of the night until the vent door reopens. You can use Vent Snare to block Mangle's path. Once Mangle enters your office, she will create an audio disturbance for a while until she drops down to jumpscare you.

Ultimate Custom Nights have challenges, there are some challenges that it is participating and being active: 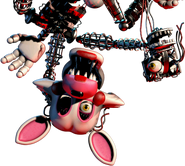 Render of Mangle in the Office

Mangle's icon in the Vent

Headshot of Mangle in the UCN Troll Game

Mangle in the Vents along with Springtrap, Withered Chica, and Molten Freddy in one of the UCN Steam teasers
Add a photo to this gallery

Retrieved from "https://freddy-fazbears-pizzeria-simulator.fandom.com/wiki/Mangle?oldid=19081"
Community content is available under CC-BY-SA unless otherwise noted.