Molten Freddy (also known formerly as Ennard) is a molten and dismantled version of Funtime Freddy.

He is the combined form of Ballora, Funtime Freddy, and Funtime Foxy, with a mask bearing resemblance to Funtime Freddy's pointing that he controls the entity.

Molten Freddy is an animatronic consisting mostly of wiring similar to Ennard from Sister Location, his body disfigured with protruding wires. He possesses no suit, wearing the decayed Funtime Freddy's mask with sharp teeth, blood splatters around the mouth, the faceplates seem to be melted and a rusty brown top hat and bow tie. There are hanging wires that run along the body of Freddy and are shaped differently from the other animatronics, which possesses wires coiled to look like muscle tissue, while Ennard's wires are tangled mess. He seems to have two arms, and a torso in his jumpscare, with the rest of him being a pile of wires as seen in the alley.

Several eyes from his body are the eyes of other animatronics. The eyes on Molten Freddy's body are similar to the pixelated version of Ennard, in which the player himself (Michael) regurgitates Ennard into the sewer.

Molten Freddy's past jumpscare from the office.

Molten Freddy's last frame of jumpscare in the Salvage Room.

Molten Freddy's last frame of its jumpscare when attacking the player in the Office, transparent background.

Molten Freddy in the alley.

Molten Freddy in the alley but lightning flashes. 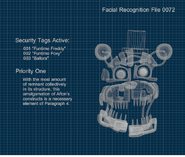 Molten Freddy's blueprint, from the Insanity Ending.
Add a photo to this gallery

Molten Freddy in the Vents along with Mangle, Withered Chica, and Springtrap in one of the UCN Steam teasers.
Add a photo to this gallery

Molten Freddy on the Ultimate Group poster.
Add a photo to this gallery

Retrieved from "https://freddy-fazbears-pizzeria-simulator.fandom.com/wiki/Molten_Freddy?oldid=28148"
Community content is available under CC-BY-SA unless otherwise noted.