Music Man is a purchasable Heavy Animatronic in Catalog Mode. The animatronic can be purchased for $19000.

He has six legs which resemble the legs of a spider on a round body. His pink and white striped torso contains a speaker like most of the Funtime animatronics do with 2 smaller speakers above and below and has a Funtime-styled appearance, but has no sign of faceplates or detachable casing. He also holds a cymbal in each of his hands and wears a black top hat with a white stripe.

"He is behind you, always, and he is sound activated. If you continue to make a lot of noise, he will slowly become more active, crashing his cymbals together faster and faster, finally ending your run with a startling face-to-face jumpscare. However, reducing the amount of noise will make him to slowly calm down."

As described above, Music Man is triggered by sound. If there is too much noise in the office, he will begin to crash his cymbals. If this continues, he will begin to crash them faster, until finally jumpscaring the player. In his jumpscare, his head simply shakes rapidly in front of the player, not showing any signs of real movement. He is one of the only characters to have a background noise during his game over screen. A lively percussion song can be heard, complete with cymbals, a tambourine, a snare drum ,and a kick drum.

These are the following things that can annoy Music Man. 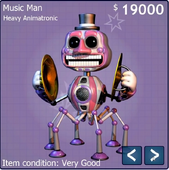 Music Man in the catalog.

Music Man's animation on the stage.

Music Man fished out of the ballpit tower. Note his Top Hat is clipping through the tower. 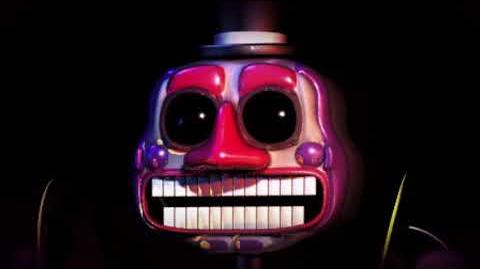 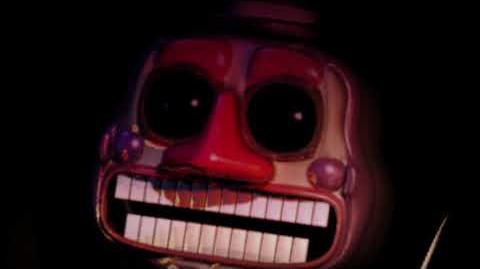 Retrieved from "https://freddy-fazbears-pizzeria-simulator.fandom.com/wiki/Music_Man?oldid=27190"
Community content is available under CC-BY-SA unless otherwise noted.