Nightmare Mangle is an antagonist exclusive to Halloween Edition of Five Nights at Freddy's 4. He returns in the Ultimate Custom Night.

Nightmare Mangle, like the other Nightmare animatronics, is a more damaged version of its normal counterpart. Its head is more tattered and broken than Mangle's, with the endoskeleton being exposed at the snout and the ears being even more damaged. Its red cheeks, nose, and lipstick are still intact, and it has one yellow eye. Mangle has two sets of sharp teeth, and its body is still mostly endoskeleton parts and wires, and its second head also features sharp teeth and resembles a human skull. 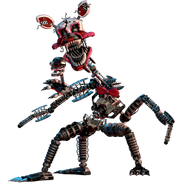 Nightmare Mangle as it appears in the UCN Troll Game.

Nightmare Mangle down the Right Hall.

Nightmare Mangle's endo head that it shoots in the UCN troll game.
Add a photo to this gallery
Retrieved from "https://freddy-fazbears-pizzeria-simulator.fandom.com/wiki/Nightmare_Mangle?oldid=25401"
Community content is available under CC-BY-SA unless otherwise noted.