Orville Elephant is a buyable entertainer which is strangely from Rare Finds Auctions and a mid-size animatronic.

Orville is an anthropomorphic elephant. He is orange in color with a lighter shade on his nose, inner ears, his torso, on his feet, and around his eyes. He wears a purple tophat with a white stripe at the base. Similar to Mr. Hippo, Orville has a large flower on his chest as well as two small black buttons. He holds a black wand with a white tip in his left hand. A gray box can be seen behind him connecting to his backside, presumably his power source.

Orville Elephant costs $4100, making him by far the most expensive of the Mediocre Melodies group. He grants the player 7 points in ENTERTAINMENT as well as 1 point in ATMOSPHERE and 1 point in REVENUE. All in all, Orville Elephant is one of the best animatronics you can buy, but he is also decently expensive and his usefulness pales in comparison to the other "Rare Finds" animatronics except for Lefty.

Orville speaks in a pleasant, grandfartherly tone. He is very good friends with Mr. Hippo, and enjoys feeding birds at the park and watching the fish in the river. His favorite food is rye bread. He is perpetually calm, excluding his jumpscare, and also very polite and soft-spoken. He used to feed rye bread to the birds until Mr. Hippo informed him that bread could kill birds, so now he just feeds them seeds, instead.

Orville Elephant: He climbs around in the overhead duct system making his way toward the hoses that drop into your office. Use the heater to repel him, or the audio lure to hold him in place. He is fooled 10% of the time by the audio lure. He is slightly faster than Nedd Bear. 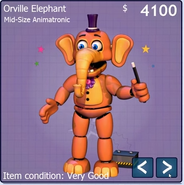 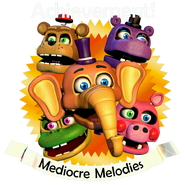 Orville from the UCN troll game.

A sign on the Duct System camera resembling Orville.
Add a photo to this gallery 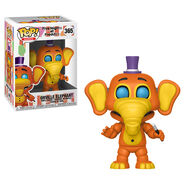 Orville in the Ultimate Group poster.
Add a photo to this gallery

Retrieved from "https://freddy-fazbears-pizzeria-simulator.fandom.com/wiki/Orville_Elephant?oldid=26626"
Community content is available under CC-BY-SA unless otherwise noted.