Pigpatch is a buyable entertainer from Stan's Budget Tech which can be purchasable in Catalog Mode. He is also one of the five of the mid-size animatronic and also one of the instrumentalists in-game.

Pigpatch, much like his name, resembles a bipedal, stereotypical pig. He is pink in color, with a lighter shade on his snout, inner ears, torso, and on the bottom of his feet. A pink belly button can be seen on his torso, as well a spiral tail on his back. Similar to Happy Frog, Pigpatch has a different colored pelvis and upper legs, resembling pants. His cheeks are red and he has a right green eye and a left royal blue eye. He carries a brown banjo with tan accents. A electronic box with circuits and wires can be seen behind his left foot.

Pigpatch, like the rest of the Mediocre Melodies, starts off by climbing into the overhead duct system, making his way to the hose ducts that are present in the Office. If the player fails to notice his warning sign in time and deter him, Pigpatch will jumpscare the player, ending the player's night. He is slightly faster than Mr. Hippo, making him a bit more of a threat. He can be repelled by the heater (though it is risky to do, since it will agitate heat-sensitive animatronics), or held in place by the audio lure (he's fooled 100% of the time with the audio lure, so you can use it to stall him periodically before using the heater to send him away). 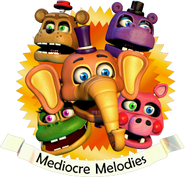 Pigpatch shown botton-right on the "Medicore Melodies" achievement card.
Add a photo to this gallery

Pigpatch from the UCN troll game

PigPatch in the Chica Intermission Cartoons

PIgpatch's warning sign
Add a photo to this gallery 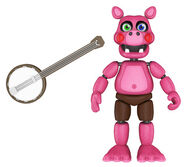 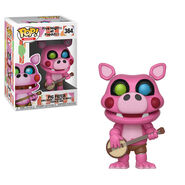 Pigpatch on the Ultimate Group poster.
Add a photo to this gallery

Retrieved from "https://freddy-fazbears-pizzeria-simulator.fandom.com/wiki/Pigpatch?oldid=27450"
Community content is available under CC-BY-SA unless otherwise noted.