Scott Cawthon (born July 26, 1971) is a 47-year old American independent video game developer, animator, and writer, and he's best known for his creation & evolution of the Five Nights at Freddy's franchise. Cawthon has created other games and animations, such as "Chipper & Son's Lumber Co.", "There is No Pause Button!", "Rage Quit!", and more.

While, he is a game designer by "trade", he is the first and foremost a storyteller at heart. He was a graduate of The Art Institute of Houston and he now lives in Texas with his wife and four sons.

The beginning of Cawthon's career in game design and animation can be dated back to the 1990s. Cawthon revealed his first game (titled Doofas) during a livestream by YouTube personality Lewis Dawkins (A.K.A Dawko), which he made when he was a child. This game later become a troll game as the "demo" of Ultimate Custom Night. His first official games were released in the early 2000s, one of the earliest known being RPG Max, released in 2002. He later joined Hope Animation, where he created animations for children based on Christian values.

On March 19, 2007, Cawthon uploaded the first part of an eight-part series titled The Pilgrim's Progress to his YouTube channel. The animation is a retelling of John Bunyan's novel of the same name.After releasing The Pilgrim's Progress, Cawthon developed several games, including Sit N' Survive, Chipper and Sons Lumber Co., and The Desolate Hope. Some of these were submitted to Steam Greenlight. While The Desolate Hope made it through the process, some games, most notably Chipper and Sons Lumber Co., were heavily criticized by prominent reviewers for having characters that moved and interacted with each other like animatronic machines. While initially discouraged, almost to the point of stopping game development completely, Cawthon eventually decided to use the animatronic-like characters to his advantage, sparking the development of Five Nights at Freddy's.

On July 24, 2014, Cawthon submitted Five Nights at Freddy's to IndieDB, where it gained massive popularity. He then submitted it to Desura on August 13, 2014, and also submitted it to Steam Greenlight on June 13, 2014, where it was accepted August 18, 2014. A trailer was shortly released on June 14, 2014, with a demo following on July 24, 2014. On August 8, the game was released for $4.99 on Steam. The game was well-received by critics, and became the subject of numerous popular Let's Play videos on YouTube. Scott Cawthon then went on to develop seven follow-up games.

Warner Bros. Pictures announced in April 2015 that it had acquired the rights to adapt the series to film. Roy Lee, David Katzenberg, and Seth Grahame-Smith were set to produce. Grahame-Smith stated that they would collaborate with Cawthon "to make an insane, terrifying and weirdly adorable movie". In July 2015, Gil Kenan signed to direct the adaptation and co-write it with Tyler Burton Smith.

In December, 2015, Scott Cawthon released teasers for his first novel, Five Nights at Freddy's: The Untold Story, soon to be renamed Five Nights at Freddy's: The Silver Eyes. The book was released on December 17, 2015, as an e-book for Amazon Kindle; a paperback edition is also available for ordering. According to Cawthon, the book was released earlier than its planned release date due to a mistake on Amazon's part.

On June 24, 2016, Cawthon announced that he had made a three-book deal with Scholastic Corporation and that the first book (The Silver Eyes) would be reprinted on paperback in October that year, with the second and third being released in 2017 and 2018.

On September 15, 2015, Cawthon announced the development of a new role-playing video game, titled FNaF World. The game is not a horror game; rather, it is a stylized RPG. It was released on January 21, 2016. Four days later, Cawthon pulled it from the store, not satisfied with the results, and released an improved version on Gamejolt for free on February 8.

On May 21, 2016, Cawthon released a teaser trailer for Five Nights at Freddy's: Sister Location, featuring a clown-like animatronic, a dancer animatronic, and "Funtime" variations of Foxy and Freddy from the series. The game was released on October 7, 2016, and was generally well received. Cawthon then released a free custom night update on December 2, with "Golden Freddy Mode" being added to the update soon after.

In January 2017, Cawthon stated that partially due to "problems within the movie industry as a whole", the film "was met with several delays and roadblocks" and it was "back at square one", but he promised "to be involved with the movie from day one this time, and that's something extremely important to me. I want this movie to be something that I'm excited for the fanbase to see."In March 2017, Cawthon tweeted a picture at Blumhouse Productions, suggesting the film had a new production company. In May 2017, producer Jason Blum confirmed the news, claiming he was excited and working closely with Cawthon on the adaptation. In June 2017, Gil Kenan said he was no longer directing the Five Nights at Freddy's film after Warner Bros. Pictures' turnaround.

On June 27, 2017, Scott Cawthon's second novel, Five Nights at Freddy's: The Twisted Ones, was released. It was the sequel to The Silver Eyes, and its story follows the main character, Charlie, who is "drawn back into the world of her father's frightening creations" when she tried to get over the events of The Silver Eyes. On August 29, 2017, Cawthon released the first official guidebook of Five Nights at Freddy's, entitled The Freddy Files. It contains character profiles, easter eggs, tips on playing the games, and theories sprouted from the franchise.

On July 3, 2017, Cawthon announced the cancellation of a sixth main installment to Five Nights at Freddy's, after previously stating a month earlier that a sixth game was in the works. He reasoned that it was because he had been neglecting other important things in his life, but said that he was not planning to abandon the series and may release a FNaF World-styled pizzeria tycoonspin-off game in the future. However, with the release of Freddy Fazbear's Pizzeria Simulator on December 4, 2017, this was confirmed to be a troll. This sixth installment is the finale of the main series.

On December 26, 2017, Cawthon released the second guidebook for Five Nights at Freddy's called Survival Logbook. Unlike previous book releases, Survival Logbook has no listed Amazon Kindle editions, implying that it has pages designed for physical writing as opposed to simply reading from a device. The book, disguised as a normal children's activity book, contains many things to do, including a word search, grid drawing, and fill-in-the-blank activities, however all of these were found to hold secrets involving the lore.

On February 13, 2018, Blumhouse Productions revealed on twitter that Chris Columbus would be working on the film as a director, alongside producing it with Blum and Cawthon.

On June 28, 2018, the presumed send-off to the series, Ultimate Custom Night, was released on Steam for free. It features over 50+ characters from the franchise.

In August 2018, Cawthon posted a Steam forum, in which he states that the movie will be based on the first game, and that if second and third movies are made, they will be based on FNaF 2 and FNaF 3, respectively. He also wrote that the deals for the console ports have been signed, as well as more info on the virtual reality and augmented reality games. On August 27, 2018, Cawthon commented on a post regarding Fazbear's true voice in UCN, "I have a feeling we'll be seeing more of Kellen in the FNAF universe. His work isn't done yet," hinting that he is possibly developing an eighth game.

A number of Scott's games are on mobile platforms, which can be found on the pages below: 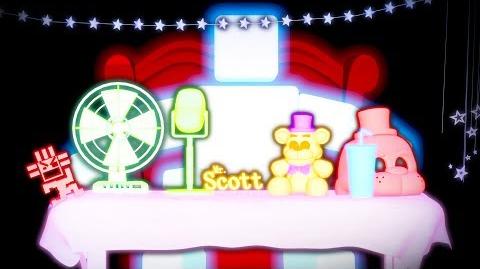 An Interview with Scott Cawthon
Add a photo to this gallery
Retrieved from "https://freddy-fazbears-pizzeria-simulator.fandom.com/wiki/Scott_Cawthon?oldid=28296"
Community content is available under CC-BY-SA unless otherwise noted.