Springtrap (also known as a withered Spring Bonnie with William Afton inside of it) is the main antagonist of Five Nights at Freddy's 3, and returns in the Ultimate Custom Night. He is a massively-damaged rabbit animatronic/springlock suit hybrid.

Springtrap is a greenish-yellow springlock suit holding the corpse of William Afton. He used to be yellow but decayed over the years. He is a dark green in color, with yellow/green eyes resembling those of a human being. Springtrap's body is heavily tattered, especially his torso and arms that expose his human flesh. While both hands and feet are attached and generally intact, his legs are entirely stripped from the mid-shin down, fully exposing endoskeleton metal and wiring. Several finger joints from each hand are missing in their suit overlays. The middle and pinky fingers of his right hand are notably missing their fingertips.

He also appears to wear a black button on his torso, referencing to his past occupation at Fredbear's Family Diner as Spring-Bonnie.

He has two sets of teeth, one on the bottom and one on the top. His ears are broken, mainly the right one, which is missing the rest of it. His eyes are larger than the regular animatronics.

Like the other few animatronics, Springtrap will sneak through the Air Vents to attack the player. The player has to track him down on their Vent Monitor. Unlike the others, Springtrap moves in a silent manner, in which the player will have to check if his face appears at the front vent. Closing the vent door will send Springtrap back to his original position. If not, he'll proceed to jumpscare the player. 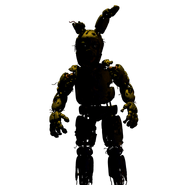 Render of Springtrap standing in the Office (FNaF 3 version) 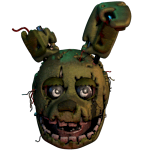 Springtrap's headshot on the Vent Monitor (also used in the UCN Troll Game.)

Springtrap in the vent in the office before attacking.

Springtrap's eye that he shoots in the UCN troll game.

Springtrap in one of the 2nd anniversary teasers along with William Afton (notice the bone hand on the bottom left).

Springtrap as he appears on the Ultimate Group poster.
Add a photo to this gallery

Springtrap in the Vents along with Mangle, Withered Chica, and Molten Freddy in one of the UCN Steam teasers.

Springtrap's face peering out of the middle vent, in the UCN Troll Game's ending screen.
Add a photo to this gallery

Retrieved from "https://freddy-fazbears-pizzeria-simulator.fandom.com/wiki/Springtrap_(FNaF_3)?oldid=27528"
Community content is available under CC-BY-SA unless otherwise noted.