Withered Chica is an antagonist in Five Nights at Freddy's 2. She is a returning character for the Ultimate Custom Night.

Withered Chica is a badly damaged counterpart of Chica. Like the other Withered animatronics, her design is an another major difference between her and her original counterpart, Chica. She is on smudgy yellow in colour and has a orange beak that sits on the stop and bottom of her face, she also has 4 sets of teeth, one set being her regular teeth, the other being her endoskeleton teeth. Her eyes are in magenta colour, another similarity, but are wider than the regular animatronics. Her jaw is dislocated with is now showing her endoskeleton blue and red wires.

Withered Chica's arms are in a horizontal, T-posed position and lacks her hands, which are now replaced by stumps with wires pouring from each end. She still wears her ironic "LET'S EAT!!!" bib, but it appears to be dusty. Her feet now have three sharp toes which is silver in color.

A headshot of Withered Chica from the UCN Troll Game. 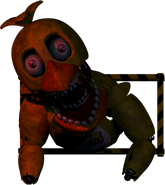 Withered Chica stuck in the vent.

Withered Chica's icon when going to the vents.
Add a photo to this gallery

Withered Chica in the Office when being stuck in the vent.
Add a photo to this gallery

Withered Chica, stuck in the Vent, along with Toy Bonnie in one of the Ultimate Custom Night Steam teasers.

Withered Chica in the Vents along with Mangle, Springtrap, and Molten Freddy in one of the Ultimate Custom Night Steam teasers.
Add a photo to this gallery

Retrieved from "https://freddy-fazbears-pizzeria-simulator.fandom.com/wiki/Withered_Chica?oldid=28387"
Community content is available under CC-BY-SA unless otherwise noted.